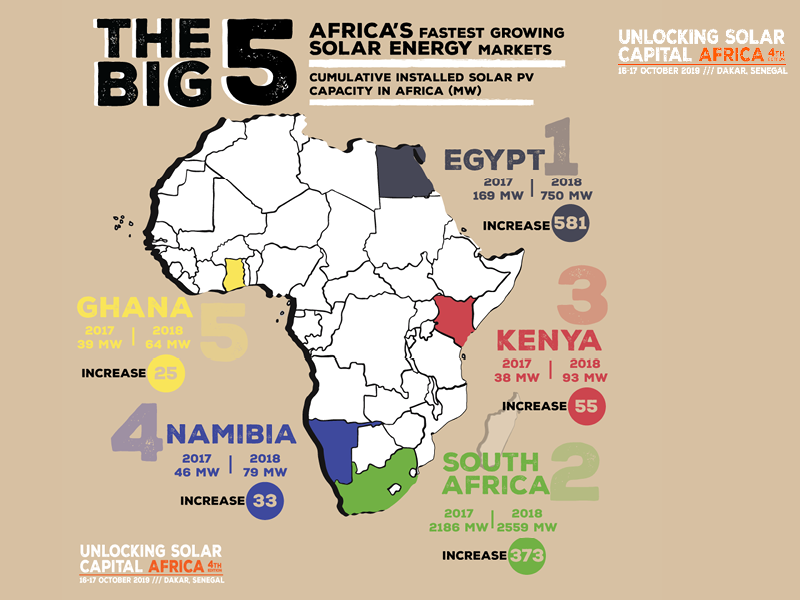 Africa has shown great progress in the development of its solar energy markets over the last year.

Together they contributed 1,067MW of newly-installed PV capacity in 2018. To dissect this development, Solarplaza analysed the 5 fastest growing solar PV markets in Africa (“The Big 5”) in more detail, based on the 2018 statistics provided by the International Renewable Energy Agency (IRENA).

Egypt – one of the sunniest countries in Africa – has enjoyed a monumental year in terms of new PV installations, making it the fastest-growing solar energy market in Africa in 2018, ahead of South Africa, Kenya, Namibia and Ghana. The country’s solar industry burst onto the scene last year by adding around 581MW of new PV capacity, an almost fourfold increase compared to what it had installed in 2017, thereby overshadowing the 373MW of PV capacity added by South Africa. Much of this capacity was bundled up in the monumental Benban solar PV complex, which is still adding MWs of capacity by the day.

South Africa has long been hailed as Africa’s largest solar energy market, and justifiably so. With an installed PV capacity of 2.5GW, the country is by far the largest market in terms of operational solar systems. However, the country’s solar market has experienced some stagnation over the past years, especially due to the postponement of its renewable energy auctions. Despite this, South Africa was still able to add 373MW of solar energy capacity to its power mix in 2018.

Kenya, one of the strongest and most advanced economies in Central and East Africa, added 55MW of PV capacity, a new record for the country. The country currently has an energy mix consisting of around 65% of renewables, making it one of the renewable energy leaders in Africa. However, the solar sector still has its work cut out for  if it wants to challenge hydropower in the renewables space.

Namibia, the driest country in Sub-Saharan Africa, was able to almost double its installed PV capacity, from 46MW in 2017 to 79MW in 2018. The country has always shown significant potential for solar energy development but has only recently been able to truly step up to the plate.

Ghana, the only country in West-Africa highlighted in this report, has put an impressive amount of focus on solar energy development over the last couple of years. The country added 25 MW of new PV installations in 2018 to come to a total of 64 MW of cumulative installed solar energy capacity, which represents an annual growth of 76%.

All in all, ‘the Big 5’ have positioned themselves as the continent’s fastest-growing solar energy markets. Will they be able to retain their positions over the coming years, or will ambitious fast-movers like Nigeria, Botswana, Mali or even Angola make a sprint to a podium position?

Want to learn more about Africa’s solar energy industry? Join us at the fourth edition of the Unlocking Solar Capital Africa conference, taking place on 16-17 October 2019 in Dakar, Senegal.

Subscribe here for more articles and updates on Renewable Energy